On the occasion of the BLUEMED 30 months meeting in Thessaloniki, Atlantis Consulting S.A. organized, on the 26th June, a European Maritime Day event in Thessaloniki, titled “One Sea. A Common Culture. A Great Future”. The event was under the auspices of the European Commission in the context of “European Maritime Day in My Country”. The event was held at the NOESIS Thessaloniki Science Center & Technology Museum, hosting 3 sessions of presentations and fruitful discussions on the accessibility of UCH sites, public awareness and promotion practices of Underwater Cultural Heritage, as well as, Blue Growth prospects.

The speakers managed in a very short time to inform, impress and excite the audience with their important actions and research activities.

Mrs. Angeliki Venetti, BLUEMED project coordinator from the Region of Thessaly, spoke about the idea, aims and achievements of the BLUEMED Euro-Mediterranean project (The idea and the role of BLUEMED).

Dr. Pari Kalamara, Director of the Ephorate of Underwater Antiquities, presented the actions of the BLUEMED project for the responsible accessibility to underwater cultural heritage sites in Greece such as the shipwrecks of Peristera, Kikinthos, Telegraphos, Cape Glaros (Bluemed pilot sites in Greece). Furthermore, Mrs Kalamara presented the completed diving route designed for the responsible visit and protection of the shipwreck of Peristera, in Alonissos Island.

Dr. Barbara Davidde, representative from the Italian Ministry of Culture, spoke about the actions of the BLUEMED project in Italy and more specifically to the development of new techniques and methods for the conservation and protection of the underwater cultural heritage, while giving emphasis on recent discoveries in the sunken city of Baiae in Naples, Italy (BLUEMED pilot sites in Italy).

Mr. Vedran Dorušić, owner and director of Dive Centre FOKA Ltd., informed about the ways of responsible visit and surveys of shipwrecks and antiquities in Croatia (A BLUEMED pilot site in Croatia). The speaker focused on a unique method developed in his country to protect wrecks by covering them with special metal cages.

Dr. Yianna Samuel, project coordinator from the University of Cyprus and research scientist at the Oceanographic Center, presented the methodology of studying, recording and mapping biodiversity in BLUEMED pilot sites, underlining the importance of the underwater environment and ecosystem (Recording marine biodiversity in UCH sites; awareness through KACs).

Prof. Fabio Bruno, from the University of Calabria, and founder of the Italian spin - off company 3D Research Srl. emphasized on the promotion of the underwater cultural and natural heritage by means of innovative technology and VR and AR systems (A-state-of-the-art innovative digital technology as a means of raising public awareness).

Dr. Kimonas Papadimitriou from the Aristotle University of Thessaloniki and member of the Underwater Surveying Team, pointed out the need to study, protect and preserve the modern shipwrecks, important testimonies of our underwater cultural heritage (Modern wrecks in Greece; the need to survey and highlight an unknown wealth).

Mrs. Despina Koutsouba, Underwater archaeologist from the Ephorate of Underwater Antiquities, presented the significant number of wrecks in Lavreotiki region that could potentially be underwater accessible sites (Potentials of valorization of wrecks at the sea area of Lavreotiki).

Mr. Angelos Maglis Founder and Vice President of ATLANTIS CONSULTING SA, presented the actions and initiatives undertaken within the framework of the BLUEMED project (BLUEMED as an integrated effort of Blue Growth) and the potential of Greece for sustainable development and Blue growth perspectives.

Mr. Ioannis Georgigas, General Manager of the City of Sustainable City Network, presented the contribution of the Municipality of Pylos - Nestor to the protection of the underwater cultural heritage of Greece (A case study in the Pylos – Nestoros area).

Mr. Vassilis Mentogiannis, technical director of UFR team and founder of the Hippocampus Marine Institute, moved the public with his important work on the protection and rescue of Hippocampus, a species included in the IUCN Red List of Threatened Species (Hippocampus in the Strymonic Gulf).

The event was an opportunity for BLUEMED partners, and more particularly ERDF, EUA, MIBACT, University of Cyprus, UNICAL and ATLANTIS to promote BLUEMED project through interesting presentations. You can watch the event on the following links: 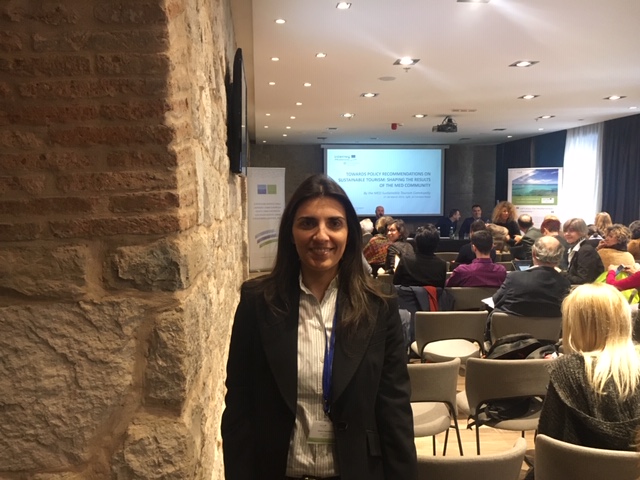